Or how I’ve learned to cope with JavaScript fatigue.

Find this project on Github

I’ve very recently started to play with an Arduino Starterkit.

Knowing literally zero about hardware components, electronics and how one would even write code for this physical world, I can honestly say I was very surprised at how easy and accessible getting started was. My hello world of robotics (a blinking LED light, of course!) was done from scratch in under ten minutes, which was surprisingly quick and painless.

But the real fun began when JavaScript and node.js entered the picture on electronics!

You might think you’re confined to programming your Arduino with the subset of C/C++, since it’s the default programming language for this environment. Most Arduino starter kits will give you sample projects with code in C.

While there’s nothing wrong with doing this (I’m still following the starter projects in C and learning from them), the possibility of using the power of JavaScript (and by extension, the power of the Web!) allows you to think much more creatively, especially if you come from a Web development background.

Plus, you get to brush up your node.js skills a bit. 🏆

Johnny-five is a JavaScript Robotics programming framework. It enables you to read and write to and from your Arduino board using JavaScript. It’s open source and has a very straightforward API that resembles jQuery, so it’s actually very likely that it will already look very familiar to you.

Take a look at the following snippet of code to change the colour of an RGB led:

Even if you’ve never programmed before, I’d argue that’s a pretty straightforward way of declaring what you want to happen to an LED light.

Here’s the full video of what we’ll be making: I’m using an iPad here to control the color of the light, but obviously you could do it using your phone too:

Again, if you just want to copy and paste the code for this, it’s available on Github.

Notice that this LED has 4 legs, instead of the usual 2 for regular LEDs. In fact, the RGB LED can as the name itself implies, produce 3 colours simultaneously: red, green and blue. The longer leg is called the cathode, and you’ll use this to connect to ground (-).

Here’s a schematic of how you’ll build it: 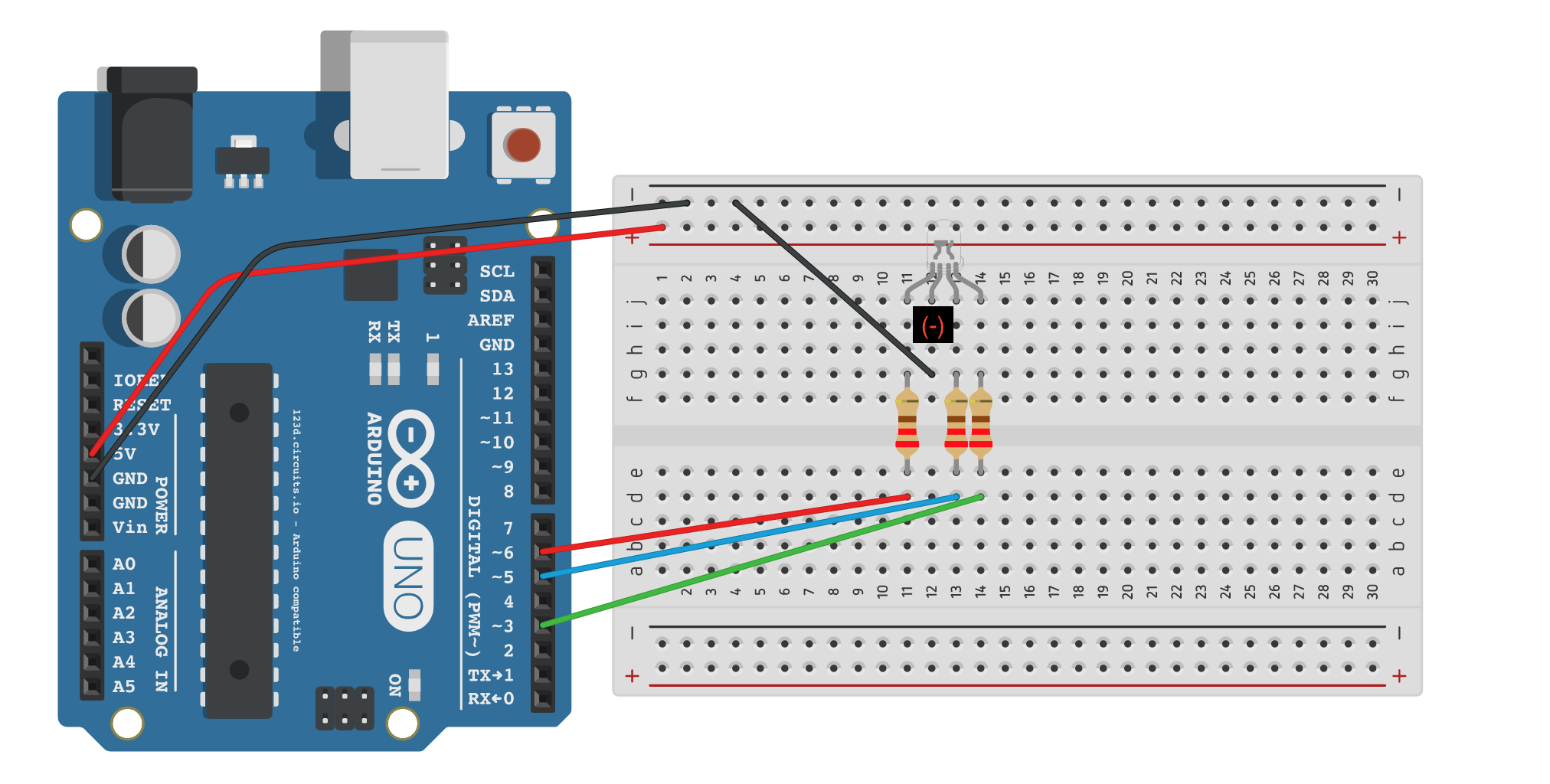 (Side note: while searching for a place where I could draw diagrams and schematics of electronics, I stumbled upon 123d Circuits. This is incredible, not only you can make these diagrams but you can also simulate code in them! Epic? Epic!)

I won’t go into the details as to why we’re connecting these to the PCW slots, as I’m sure someone else out there will make a better job at explaining this than me. In a nutshell, the PCW connectors enable us to work with values that aren’t simply 0 and 1 (useful for on and off states), since we want to be able to give values from 0 to 255 to each individual colour.

So let’s prepare your Arduino to receive JavaScript! Luckily, you’ll only have to do this once.

Troubleshooting: Actually, I was unable to upload the Firmata using the Arduino IDE running 1.6.8. Apparently it’s a known bug, and after updating to the 1.6.9 version everything went smoothly.

Step #2: Give johnny a light

Since we’ll be using node.js to communicate with the Arduino, make sure to have it installed on your machine first. Then create a new folder somewhere on your machine, create a file called app.js and install johnny-five on this folder, by running on your terminal on this directory:

Later we’ll need to install other packages such as express to create a local server so we can have interaction via a server, but for now, this is really all you need to communicate with the Arduino itself.

To make sure it’s working, you can run the following:

You should see Arduino is ready! on your terminal, after running node app.js.

There’s tons of ways we can control the individual colours for the RGB light. One of the projects in the Starter Arduino Kit reads the ambient lightning values using light sensors, and changes the colours accordingly. You can also manipulate it based on temperature or any other external input.

In this case, we’re interested in building a web interface so we can manipulate the values directly. And this is why we’re going to use web sockets, namely a neat little library called socket.io.

The benefit of this is real time effects: this is what allows you have your Arduino connected to your computer, but being able to control the input from a phone or an iPad that’s pointing to your server.

By broadcasting the change events, anyone else connected to the server will also see the same values that you do (think, chat application. Works both ways).

So we’re going to build a local web server. Since we’re already using node.js for this, let’s simply deploy a quick and simple express server that will host the code and serve the static client files for us.

So let’s install both express and socket.io before moving on:

And into our app.js folder, let’s dump the following code:

That’s a lot of code at once, so let’s break this down. The first part simply sets up express and serves our local files (the HTML and the JavaScript client) in the 3000 port.

The second part is all the Arduino magic. All the code that’s wrapped inside five.Board().on('ready', function() {...} executes once the connection to the Arduino is made. If you’re coming from a web development background, think of it as your document.ready.

Whenever socket.io receives a change event, the values of the inputs (we’ll get there in the next bit) are sent with it, as a data argument, like the following:

The event names, of course, can be whatever you want them to be. I’ve named this one rgb, because, well… that’s what we’re dealing with.

The HTML markup is very simple:

We have 3 sliders, one for each colour. If you want to add a dash of CSS styling as well, just copy it over from the Github repo. Notice how we’re also including the script to connect to socket.io.

And finally, all of client interactivity code. On each change event for each slider, we’re sending a new event to socket.io that contains some data: which colour was changed, and its new value.

This is the data that we’re listening to in our app.js file. Client emits data, socket.io receives it on the server, and then updates the Arduino values.

So new’s recap what we have so far:

All that’s left to do is to start the local server. You can do this by typing, in the terminal:

If you don’t, make sure to check your code against the repository.

What really excites me about this are the endless possibilities of where to take it from here. Sure we’re directly manipulating the values for the LED, but we could very well be changing them based on a weather API, a Twitter account, Facebook messages, you name it.

In fact, most of this code is already re-usable. Once you fetch the data you want to use, broadcast it to your board, and decide how you want to externalise this data. Maybe using sound, maybe using an LCD? The Amazon’s sensors department is your limit.

Big shout out to the awesome people from the Reactive Podcast, especially Raquel who’s an inspiring nodebots envangelist™, for talking so often about getting into hardware programming that eventually convinced me to just get started. Go listen to their podcast!

To learn more about the johnny-five API and to try out other components, check: